In Search of Crazy King Ludwig


 In the 1800s, he built castles so enticing that Walt Disney eventually used them as inspirations for his fairy tales. But was the young king inventive—or insane? 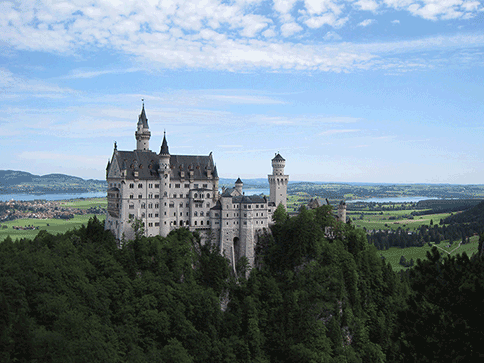 What sort of mind—genius or irrational—would be motivated to build a replica of the extravagant Palace of Versailles on an island in the middle of a lake in Southern Germany? When my wife, Debbie, and I learn that King Ludwig II of Bavaria built such a place, which is known as the Royal Palace of Herrenchiemsee (New Palace), we are fascinated. We also discover that Ludwig is best known for building Neuschwanstein—the iconic castle that Walt Disney used as the archetype for Sleeping Beauty Castle at Disneyland and Cinderella Castle at Disney World—and that he constructed several other outlandish castles. So we drag our two teenage daughters on a weeklong road trip through scenic Bavaria. Our goal? To determine whether Ludwig was the Walt Disney of the 19th century or an eccentric lunatic. 

 It’s a mission that does not seem to be resonating with our daughters. Or as Ashley, our 19-year-old, asks: “Couldn’t we just go to Disney World instead?” 

 From the Munich airport we drive southwest for two hours through the lush, Bavarian countryside, where men still dress in lederhosen, women wear dirndls, and everyone seems to wash down bratwurst and sauerkraut with a one-liter stein of lager. Traveling on a budget, we room in villages off the beaten path, in clean, comfortable, family-style guesthouses where traditional Bavarian breakfast consists of cheese slices, soft pretzels, thin slices of ham, white sausages and a jar of Nutella. 

 “Ashley was right,” says Julia, 14, our younger daughter and a notoriously fussy eater. “We should have gone to Disney World.” 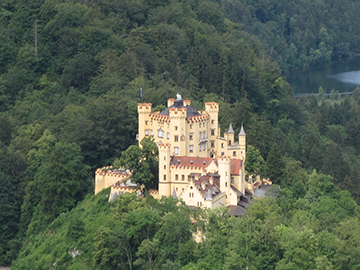 We begin our investigation at Hohenschwangau Castle. Hohenschwangau means “upper land of the swans,” and so statues, carvings and paintings of swans fill the castle. Murals depict romanticized scenes from the medieval German legend of Lohengrin, a knight in shining armor who arrives in a boat pulled by a swan to rescue the proverbial damsel in distress. As a child, Ludwig identified with Lohengrin and imagined himself as the swan knight. “Ludwig enjoyed dressing up,” his mother once said, and he also “took pleasure in playacting.” After seeing the opera Lohengrin by German composer Richard Wagner, whose powerful music intensifies the impact of the legend, 15-year-old Ludwig became obsessed with Wagner. “The same way you girls love Lady Gaga,” I feebly explain. Ashley and Julia roll their eyes.