Harry Potter and the Millennial’s Mom 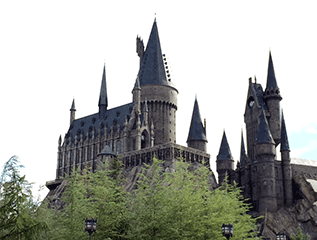 The second park is Hogsmeade, located a mile away at Universal’s Islands of Adventure theme park. Hogsmeade is home to Hogwarts Castle, which contains the Harry Potter and the Forbidden Journey ride. 

 But here’s the catch. If you want to buy your own wand in Diagon Alley and look into the Mirror of Erised in Hogwarts Castle, you’ve got to buy two admission tickets, my dear Muggles. 

 Julia rolls her eyes, compelling me to ask the obvious question: Is this mother/daughter escapade doomed from the start? 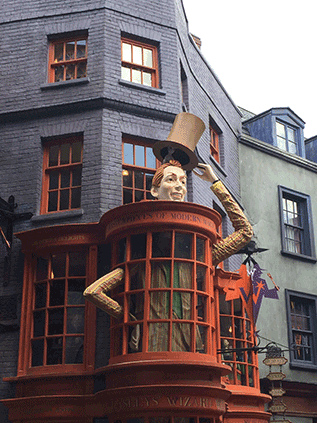 Will Julia and Debbie stick together like bowtuckles on doxy eggs? Or will Julia ditch her mother and hop the Hogwarts Express Train to Hogsmeade, leaving Debbie to explore Diagon Alley by her lonesome, drowning her sorrows in butterbeer? Will they ever speak to each other again? Or will the magic of Harry Potter cement their mother/daughter bond for a lifetime? 

 And can a theme park in Orlando, Florida (make that two theme parks with two separate admission prices), where all the Harry Potter sets are 100 percent phony, possibly meet their high expectations? 

 After all, the filmmakers used a wide variety of castles, colleges, cathedrals, and classrooms throughout Great Britain to create the grandeur of Hogwarts. Platform 9¾ was filmed in London’s King’s Cross Station. The spectacular West Highland railway line, which travels across the twenty-one picturesque arches of the Glenfinnain Viaduct in Scotland, stars as the Hogwarts Express train. The Hogwarts Library is actually Duke Humfrey’s Library at Oxford University. And the interiors of Hogwarts’ Great Hall, Hagrid’s Hut, Diagon Alley, Dumbledore’s office, and Gryffindor Common Room were all shot at Warner Bros. Studio in London—not Universal Studios theme park in Orlando. 

 To make matters worse, Debbie decides to dress up like her favorite character, Hermione Granger, complete with a the gray sweater and striped necktie. When they get through the entrace to Diagon Alley, Debbie forces Julia to help her buy a wand at Ollivanders, “makers of fine wands since 382 B.C.”