When my wife and I back-packed around the world on our honeymoon, we found ourselves in Singapore a few days before Thaipusam, a religious festival celebrating the Hindu deity Lord Subrahmanya (also known as Lord Murugan). The festival features hundreds of devout Hindus, some of whom pierce their tongues and cheeks with skewers and parade through the heart of the city carrying carafes of milk on their heads. We decided to stick around to see something we’d never seen before. That decision forever changed the way we travel.

On the morning of Thaipusam, Debbie and I woke at 4 a.m. and walked to colorful Sri Srinivasa Perumal Temple to watch the participants, clad in yellow sarongs, shish kebab themselves. They wore huge, tiered, metal headdresses called kavadis that were adorned with flowers, mirrors and peacock feathers. We marched along with the human pincushions in the three-hour procession and celebrated with their families, who embraced us and invited us into their homes. We became a part of the local scene—travelers immersed in the culture rather than insulated tourists seeing the world from behind the windows of an air-conditioned bus. 

 From then on, we’ve planned our travels around unusual celebrations. We’ve participated in the Boryeong Mud Festival in South Korea, where 2.2 million people wrestle in the town’s mineral-rich mud. We’ve partied at the World’s Shortest St. Patrick’s Day Parade in Hot Springs, Ark., where leprechauns, marching bands, floats and Irish Elvis impersonators travel down a street a mere 98 feet long. We’ve experienced the Typewriter Toss (in Springfield, Mo.), the Bonnie and Clyde Festival (in Gibsland, La.) and the World Rock Paper Scissors Championships (in Toronto).

If those adventures sound bizarre, that’s probably because they are. But by planning our travels around quirky, surreal and downright strange happenings, we’ve experienced some highly memorable events, such as: 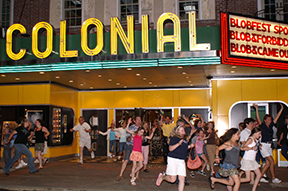 Blobfest 
 We were among the more than 1,000 people who ran screaming from the restored Colonial Theatre in Phoenixville, Pa., on a Friday night in July to re-enact the iconic scene from the 1958 science-fiction cult favorite The Blob. In the low-budget horror film, shot in Phoenixville and starring Steve McQueen, the gelatinous, amoebalike alien oozes through the projection booth. Launched in 2000, the annual Blobfest begins with a campy, 90-minute stage show that features movie-prop collector Wes Shank displaying the original Blob—a red silicone glob in a five-gallon drum. The celebration continues with the annual Blob Ball (a 1950s-style party), continuous screenings of The Blob and—my favorite—the Fire Extinguisher Parade honoring the fire-fighting equipment from the local high school that McQueen and the town’s teenagers used to save the world by freezing the creature. www.thecolonialtheatre.com
WEIRDNESS FACTOR (out of five): ★ ★ ★ ★