Wacky Uses for the Beatles


 The Beatles never directly endorsed any brand-name products, but they still managed to embrace some wacky uses for them.

The Long and Winding Panty Hose 
 When the Beatles performed their rooftop concert on January 30, 1969, for their movie Let It Be, some of their microphones were wrapped in panty hose. (Note the microphone in front of Ringo.) To the prevent the noise from cold gusts from being picked up by the sensitive studio microphones, producer/engineer Glyn Johns sent tape engineer Alan Parsons (who later served as engineer for Pink Floyd’s Dark Side of the Moon album and as frontman for The Alan Parsons Project) to buy panty hose to create nylon socks to shield the microphones. “I walked into this department store and said, ‘I need three pairs of pantyhose. It doesn’t matter what size,’” Parsons told Guitar Player in 2015. “They thought I was either a bank robber or a cross-dresser.” 

 Jell-O Submarine 
 In 20015, food artist Henry Hargreaves used Jell-O to recreate John, Paul, Ringo, and George as they appeared in the 1968 animated movie Yellow Submarine. “Here, viewers might be fooled into thinking they’re looking at a 2D illustration of The Beatles’ Yellow Submarine—but upon closer inspection, they’ll realize the reflective color blocks are, in fact, made entirely of Jell-O,” Hargreaves told Food and Wine. “It was, in the end, a fun way to introduce one enduring childhood treat to another.”  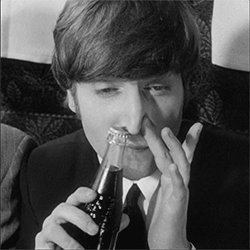 In the 1964 movie A Hard Day’s Night, John Lennon pretends to snort a bottle of Coca-Cola, a sly reference to cocaine, an trace ingredient found in Coca-Cola until 1929. The Beatles’ 1969 song “Come Together,” penned by John, includes the lyric, “He shoot Coca-Cola,” another reference to cocaine. In 1970, the BBC banned the song, deeming the lyric to be advertising for Coca-Cola, which violated its policies.